Click Here to snag those freebies
Hello everyone.  My website for teachers, engagedbyplay.com, is all about providing engaging games and activities for elementary school teachers.  On it you will find morning meeting activities and ways to excite your students in their learning.  The following is a great activity to get your day started in morning meeting called, “Think Fast.”  This is a game that gets kids warmed up for the day and that they clamor to play again and again.  One of the strengths of the game is how it gives all the students a chance to be recognized in a positive way by the class.  It is also helpful at the beginning of the year for children to learn each other’s names. 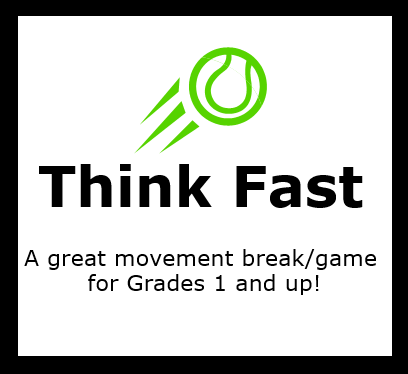 When and with who to play this game

·         Start the game by having the children stand in the circle, the teacher is the referee who stands in the middle of the circle
·         The teacher will need a small ball that bounces well (A tennis ball, racquetball or mini basketball all will work well)

·         The teacher bounces the ball and calls out a student’s name, “JOHN!”
·         The named student needs to run into the center of the circle and catch the ball before it hits the ground a second time.
·         If they manage to catch the ball the class gives them a round of applause
·         If they drop the ball or do not get to the ball in time the class should encourage the student, such as saying, “Good try John!” or “You were close”
·         That student is then out and sits down.
·         Warmup: Give everyone a try to get used to the game and go around in a circle so that they will know that it is their turn next
·         First round: Bounce the ball high in the middle of the circle so that it is easier for students to catch the ball and continue to go around in a circle
·         A student who is successful in the first round crosses their arms to signal that they have passed that round
·         When all students pass round one have them uncross their arms for round two!
·         Second round:  Start to call on students in random order to make the students have to be more attentive as well as bounce the ball I little bit lower to give them less time to run in and catch it
·         Third and following rounds: Bounce the ball in different parts of the circle as well as faster or slower, you may call on students multiple times in a row to catch them off guard
·         Continue the game until there is only one player remaining, that student is treated to a big round of applause from the entire class

Teaching Notes about this game:

This is a great game to teach about empathy: Be sure to model how the class is supposed to react when a student catches the ball or does not catch the ball. Immediately pause the game and discuss any reactions or comments a student gives that is inappropriate.
Being respectful to classmates when you are out: Discuss the importance of being respectful to the other classmates once you are out.  Emphasize how they should pay attention to the game, not talk and continue to encourage their classmates.

Other Ways to Play:

Other ways to “Think Fast”:  After students are familiar with the game, in the later rounds I will start to give other signals other than just their first name.  I may use the student’s last name instead.  I may start saying things like, “The person who is wearing a green T-Shirt” or “Has sandals on” or “Has a brother in 2nd grade” to get them to really get their brains working.
Basketball “Think Fast”: I keep a mini basketball hoop in my classroom for various games.  After students are familiar with the game I include the basketball element into the game.  After the students catch the ball, wherever they catch it they must turn and shoot the ball in the basket.  If they miss they are also out.  In the first rounds I bounce the ball very close to the net and in later rounds I start bouncing the ball further and further away.
Want a printable version of this activity? Click here!

Did you get your FREE math fact puzzles? Click to

This apple bulletin board is great for the back to

There's something about turtles that I just adore.

Have you grabbed this FREE download yet? It contai

Lately I have been trying to do things that make M

This picture captures the joy I had when 15 other